If you’re looking for a site where you can compare cheap archeage gold prices and provider, than head on over to ARCHEAGE-STORE.COM. This is, by far, what I consider the best place to go to when I am looking to buy gold online.

If you want to get rich in ArcheAge, then you’re going to need to get familiar with the trading system, as it is the best way to get money fast and stay ahead of the curb. It’s not without its own risks, as there are a ton of player pirates/thieves that’d love nothing more than to steal all your hard-earned trading packs and sell it themselves. So, what exactly is the best way to go about trading? Let’s take a closer look. 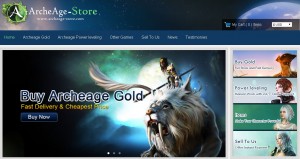 Let’s start with the basics. Trade runs involve taking a trading pack and transporting it across the world. This trading pack is made by the player, and to do that, they’ll need a merchant certificate, which is sold for 50 silver, and a decent amount of resources. These resources will vary depending on the type of pack they’re making. Look in your craft book under the commerce section for a detailed list.

After obtaining the required resources and a merchant certificate, a player will open their map to locate a nearby workshop, which will actually allow them to put the pack together. Once created, they’re ready for delivery. A player have their choice of where to deliver the pack to, but the riskier and longer the route is, the more money or gilda stars they’ll end up making in the end.

The best places to deliver these is Freedom Island, but that place is in a constant state of war and covered in pirates. If you can find a good crew to roll with and minimize risk, it is one of the best places to deliver goods to, regardless of continent. Other than that, a player can choose to deliver the pack to either their home continent or a foreign one. Aside from distance, the money made from packs will also be dependent upon how many other players are delivering packs to the same spot, so the ideal situation would be a delivery location that’s far away and one that is seldom sold to. To learn the best route, then, you’d have to see what the war situation is in each zone is and get in there right after the fighting starts to die down. The world is in a constant state of flux, so it’ll be up to the player himself to keep a close eye on the current events of each zone. As soon as a zone begins peace time, that’ll be where you want to go.

Don’t just go in without looking, though; make sure to go through a practice run to get a good feel for the current state of the zone before delving in with actual trade goods.
You can also even make money by selling your trade packs in enemy zones, which can be rather risky but pay off well in the long run. The trick to this is starting another character that belongs to that faction, getting them up to level 20, and then handing off the trade pack from one character to the other. To do this, have both characters go to an out-of-the-way area that’ll be free from any prying eyes. Have the first character drop his pack, then log out, and then quickly log back in to the other character to have him pick the pack back up. Then you’ll be able to deliver it easily on your alt.

When I’m stuck with a low supply of archeage gold, I usually head on over to ARCHEAGE-STORE.COM. That is where I look for reasonable prices and reliable gold suppliers. The price comparison system is very gamer-friendly and you get to read testimonies from other gamers too!