With September dribbling to an end and cold weather approaching, we can’t think of anything better to warm up on these breezy evenings than FIFA 15. Thankfully, EA Sports rainbow kicked it right into our laps. This year’s edition includes several new features that enhance the beautiful game. This article breaks down some of the advanced maneuvers that will help you get off the bench and onto the pitch. If you need an entry course in FIFA 15 ，so first to buy some FIFA 15 coins, then read our FIFA 15 beginner’s tips. 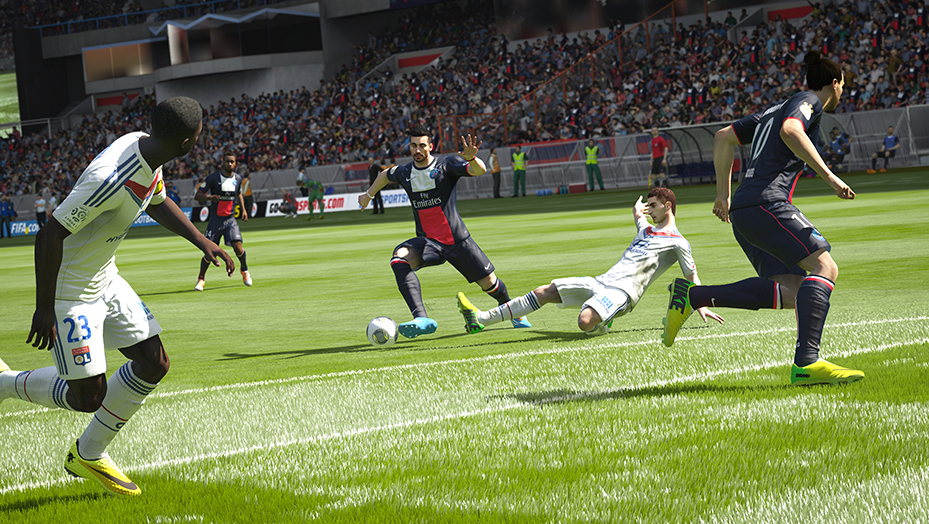 Yes, we said diving. We know it is somewhat of a dirty word in football. Besides, players never intentionally flop to receive a call. No one has ever over exaggerated a small shirt pull into a huge spectacle that results in bodies hitting grass. No way did our favorite player launch himself onto the ground to get a penalty kick to maybe win the game!

OK, let’s be honest and take a step in the right direction by admitting that diving is a real thing in leagues today. That said, we bring this up for two reasons. First, there’s controversy. Some guys would rather get caught reading Fifty Shades of Grey on a train than get caught diving in football. Second, diving in FIFA 15 does not technically exist.

Nowhere in the game’s skills training section, basic controls, advanced or even mind control will you see how to dive or “double tap joystick to dive.” That being the case, we have a good amount of games under our belts to believe diving may exist. Call it Easter egg, glitch or Bigfoot sighting, and you can be the judge.

While on offense with the ball at your player’s feet, you need to have a defender on you jockeying for the ball. You need to wait for him to put a hand on you, either grabbing your shoulder or pulling at the bottom of your jersey. While this is going on, if you hit the lob pass/slide tackle button, there is a good chance your guy will go down and an even better chance it’ll appear to be a foul in the ref’s eyes.

After we discovered this, we spent plenty of time trying to duplicate our results with hit and miss outcomes. We think it may also depend on where the ball is at your feet. If it is literally right on top of your foot, you might just boot it away when attempting to dive. We seem to have better results when the ball is a little further ahead of our player, either at full sprint or if the defender slows us down enough with his jockeying.

Again, we’re not saying diving is 100 percent possible in FIFA 15 with an easy to hit button and a guaranteed outcome. However, it did happen enough to draw our attention. We’ll leave this up to you to try and master. If anyone gets more concrete answers, please leave a comment below. We’re sure everyone would love to learn how to do this. You know, to make sure we know what to stay away from. Besides, there is no room for flopping in football, right?

How to take corner kicks the FIFA 15 way

Corner Kicks grew stale over the years. For as long as we can remember, you had two options for attacking with a corner kick. Either slow roll pass it to another player on your side and try to wiggle in for a shot on goal, or high/low cross it into the box for a nice one timer. Well, we’re happy to say EA Sports finally put a stop to this in FIFA 15, sort of.

You basically have the same options with a twist. When you line up to take the corner, you can press Down on the D-pad to bring up a tactics list for your shot. At that point, by either pressing Up, Down, Left or Right again on the D-pad, you can choose to have your players set up for different plays. You could have them run near or far post, take a top of the box stance or crowd the keeper for a chance to get an unblocked kick.

We suggest never kicking the ball without using this tactic. You wouldn’t go to an all-you-can-eat buffet and just get a salad, would you? Use the options they give you. Your chance of scoring increases greatly if you run a specific tactic and kick accordingly. Simply kicking the ball into a pool of would-be receivers up against the new ultra smart goalie A.I isn’t the best idea.

How to perform throw-ins in FIFA 15

Most of the time, a throw-in wouldn’t be a topic of discussion for an advanced tip on playing FIFA. However, this year EA included two interesting features that will help try and break out on the defense.

Up until this year, you took control of the thrower and aimed at one of your computer-controlled teammates on the pitch, regardless of whether he is open or covered. This year, by pressing the Right Stick, you can become a player on the field and push to get open yourself. When you are in the clear, press A/X depending on the system to call for the ball. This little feature is hugely beneficial, especially when playing against a real opponent and not the A.I.

Another improvement to a throw-in is a through pass. Yes, the same type of through pass you are thinking about when passing on the field (Y/Triangle). This lets you throw the ball a little in front of your intended receiver to lead him to it, with the hope of scoring a full speed break past any defenders. We find this type of throw very helpful when playing with a friend on your team. You can communicate the run much better than before.

Going for the money shot on goal

Scoring is probably the most important aspect of FIFA 15. You’ll go home upset after every game if you can’t figure out how to get the ball past the keeper, and with the goalie receiving a shot of turbo juice this year, it’ll be more challenging than ever, though no one said challenging can’t be fun.

The flair shot is something new to FIFA 15. It is a variation of the line drive shot they had in FIFA 14. By holding down LT/L2 and shooting, you now perform the flair shot. This is used for shooting from further out. It is an arched line drive that doesn’t go as high as a normal kick. This shot is harder to pull off, but getting this to go in looks fantastic. Besides, who doesn’t like scoring from 40+ yards out. Gets you bragging rights for the rest of the night.