Cristiano Ronaldo scored twice either side of a Gareth Bale strike as Real Madrid ran out 3-0 winners over Getafe in La Liga on Sunday. 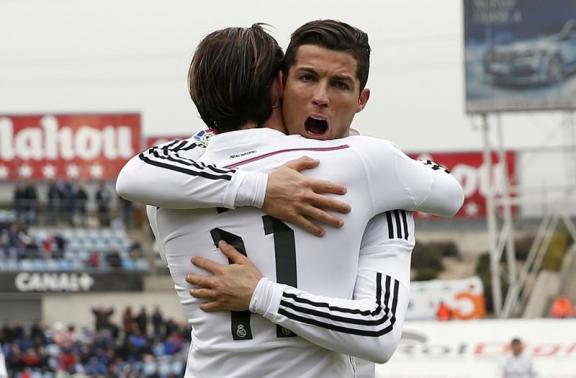 It was hardly a vintage performance from the European champions, who have stumbled at the start of 2015 and were knocked out of the Copa del Rey by Atlético Madrid on Thursday, and they failed to score in the first half of a La Liga game for the first time this season.

Ronaldo broke the deadlock on a chilly afternoon at the Coliseum in the 63rd minute, clipping the ball in from close range after excellent work from Karim Benzema.

Bale made it 2-0 four minutes later when he finished off a swift break and Ronaldo grabbed his second 11 minutes from time with a powerful header, the Portugal forward’s 28th goal of the campaign in his 17th appearance.

Getafe battled bravely against their glamorous city neighbours, with their goalkeeper Jordi Codina on fine form, and almost pulled a goal back four minutes from time but a shot from Álvaro Vázquez bounced away off a post.

Real, who have a game in hand, have 45 points from 18 matches, with Barça on 41 ahead of their clash at Deportivo La Coruna later on Sunday.

Ronaldo sent a fizzing free-kick just wide of Codina’s right-hand post, but did not have to wait long to double his tally, getting on the end of another brilliant cross from Madrid’s Colombian star to head home and seal a comfortable win for Carlo Ancelotti’s men.

Valencia and the champions Atlético, who host the bottom side Granada on Sunday, are level on 38 points, with Valencia ahead on goal difference after Saturday’s 3-2 win at home to Almería.