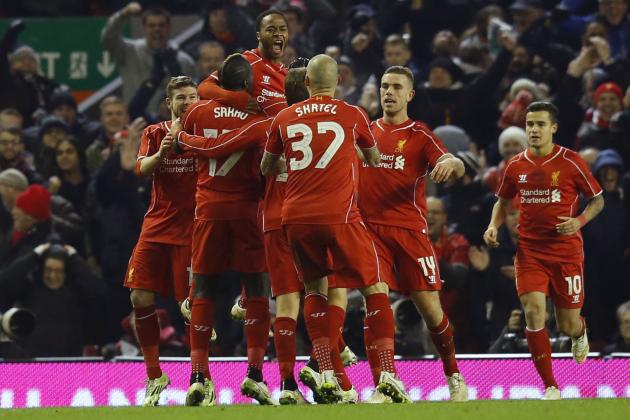 Liverpool and Chelsea are all square in the Capital One Cup semi-final following a thrilling 1-1 draw in the first leg Tuesday night at Anfield.

Hosts Liverpool held the majority of possession throughout the match but fell behind to Eden Hazard’s 18th-minute penalty.

This Capital One Cup semi-final tie goes to Stamford Bridge on Tuesday nicely poised, and with a marginal advantage to Chelsea who play the second leg at home, but it would have been so much less promising for Brendan Rodgers’ side without a brilliant second half equaliser from Sterling. At 20 years old he has met every challenge presented so far head on and now finds himself approaching the big games when finals and trophies are at stake.

The young Englishman was the outstanding player on a night when Liverpool had to fight their way back into a match that they could quite easily have allowed to slip away after Eden Hazard’s 19th-minute penalty. There were fine performances from Jordan Henderson and Martin Skrtel, and the occasional burst from Philippe Coutinho, but it was Sterling to whom the eye was drawn to again and again.

In the land of the giants – John Terry, Gary Cahill, Nemanja Matic and Thibaut Courtois – it was the little chap in Liverpool’s No 31 shirt who made the best chances for Liverpool, who had 20 attempts on goal to Chelsea’s two. The greatest compliment you could give Sterling was that with Hazard threatening to decide the game it was the Englishman who wrenched it back for his team.

As Rodgers later said, the break in Jamaica has refreshed Sterling and Liverpool, now unbeaten in nine games go to Stamford Bridge with at least the chance of an upset. Away goals will count only after extra-time is played. Sterling will be crucial. He has run through this Chelsea defence once already and it looks like he will have to do it again for Liverpool to make the final.

Rodgers hinted afterwards that Daniel Sturridge could also be back in a week’s time but there have been too many false dawns where his fitness is concerned for anyone to be sure. The Liverpool manager went on the front foot after the match, proclaiming his team could win at Stamford Bridge and bemoaning the decisions that went against Liverpool.

It is true that there was a case for a penalty against Diego Costa for a first half handball, and that in the 77th-minute Thibaut Courtois may well have handled outside the area. For all Liverpool’s best moments, Rodgers knows that Chelsea remain a formidable opponent capable of breaking the hearts of their opposition in an instant.

Impressive in the first half they slipped a little after the break and one wonders if Mourinho’s untouchables are starting to find the pace of the season a little unrelenting. Their outstanding player was Courtois while Cahill and Matic found their shortcomings exposed in a way that was rare at the start of the season.

A goal down at half-time Liverpool had not had a bad first half, even if there was a bit too much of what Mourinho might have called “sterile possession” and not enough of the chances that might test Courtois. Liverpool looked at their best when Sterling dragged Cahill into the wide areas or Lazar Markovic got at them down the right side.

There were glimpses from Coutinho in the early stages of the half, and more than once he had quicker feet than John Obi Mikel, the second change after Courtois from the team that beat Swansea 5-0 at the weekend. Mikel is brought in when Mourinho wants to reinforce the protection of his back four, and in this case he moved Cesc Fabregas forward to the No 10 role and dropped Oscar to the bench.

For all the fleet-footedness of Sterling, Markovic and Coutinho in the first half, not to mention 63 per cent possession, the best attempt on goal from Liverpool before the break was a sweetly struck, dipping Steven Gerrard shot that Courtois pushed one-handed over the bar.

The request from Mourinho that the Chelsea support lay off that song about the Liverpool captain was ignored – naturally – and there might even have been a brief shake of the head from the away team’s manager when it first began. Gerrard, starting out on the right came in and out the game in the first half which was as good as Mourinho could have hoped for.

On the counter-attack, Chelsea always looked extremely dangerous – especially with Liverpool’s back three square on and Fabregas looking to drop the ball over the top for Hazard to run onto. Their goal began with a darting run from Fabregas down the left to the byline that Emre Can should have stopped and, failing to do so, he chased the pass to the feet of Hazard and made the challenge that cost his side a penalty.

It only takes the slightest misjudgement when challenging Hazard to turn a routine tackle into a catastrophe. So it was with Can, who took enough of the winger’s leg to give referee Martin Atkinson an easy decision. From the penalty spot it seemed like Hazard only needed a twitch of the eyebrows for Simon Mignolet to fling himself to the wrong corner.

A goal down, Liverpool kept their patience but created precious few chances up to the break. There were cheap bookings for Gerrard and Lucas Leiva and then another for Filipe Luis to even things up. The ball struck the wrist of Costa while he was grounded in his own area. A difficult decision at the best of times but Atkinson was never going to try to call it through a thicket of players that gave him no view of it whatsoever.

It changed after half-time and the confidence with which Chelsea had corralled and controlled the possession that Liverpool enjoyed seemed to slacken. Rodgers’ team started to get at them and when the equaliser arrived just before the hour it was well-deserved.

Sterling took the goal brilliantly: a ball down the middle from Henderson, a turn and acceleration from his English team-mate and a great finish. Watching again it was evident that even as the ball came to Sterling in the area, Matic was nowhere near close enough. Sterling sprang away from him in a few steps, caught Cahill flat-footed and darted left, shooting low past Courtois.

Back level, Liverpool had greater confidence and Coutinho made a return to the action. It was the Brazilian who darted down the left and cut the ball back for Gerrard whose left-foot shot Courtois did not even try to save. It clipped the outside of the Chelsea post and went behind.

The Liverpool captain went off after 70 minutes, replaced by Adam Lallana and Rodgers’ team looked the stronger in the closing stages. Sterling’s knockdown for Lallana on 79 minutes gave the scope for a shot that was brilliantly saved by Courtois. It was his wrist that may have made contact with the ball outside the box but it was impossible for Atkinson to see definitively. It was Chelsea hanging on come the end.

Liverpool continued to push for the winner until the end of the 90 minutes but were unable to turn their superiority into another goal. With a trip to Stamford Bridge looming in the second leg, the Reds might come to rue their missed chances.

Man of the match: Sterling