Hard to talk about Final Fantasy XIV A Realm Reborn without slipping a note on his predecessor Final Fantasy XIV Online. Launched in September 2010, the game continued to accumulate handicaps and blunders, and was a total failure. A redesign took over, starting with the team that replaced Hiromichi Tanaka by Naoki Yoshida.

The latter promised to bring us something new entirely different from his predecessor. It took three years of development and beta test phases for the game to finally come out on August 27, 2013. Has Yoshida made it? 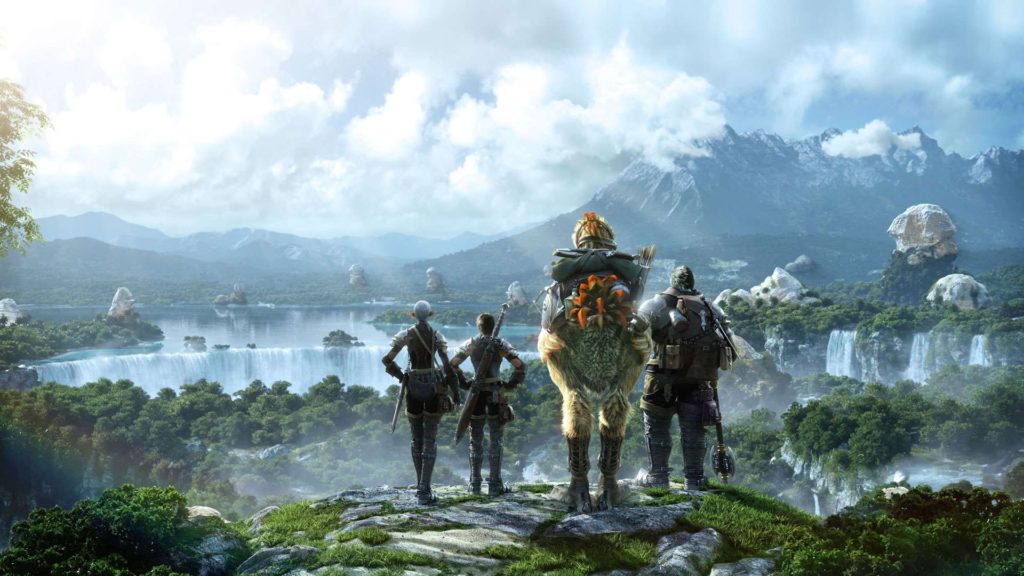 THE BEGINNINGS IN FINAL FANTASY XIV AT REALM REBORN

Final Fantasy XIV A Realm Reborn takes place 5 years after the destruction of Eorzea. You will wake up looking good after a long hibernation and start by creating your character. Final Fantasy XIV A Realm Reborn features six races (Lalafell, Roegadyn, Miqo’te, Lalafell, Hyur, Elezen, Au Ra) and eight playable classes (Archer, Pugilist, Hastmaster, Marauder, Gladiator, Elementalist, Occultist and Arcanist). The character creation is totally different from the first part, because the customization options here are almost unlimited, so you can easily get a unique character. You can add your personal touch, from the eyebrows, to the color of the hair, to the measurements. At any time of the game, you can change class by changing weapon only. Each class will keep its own level.

Side grip, you will be guided by complete and explicit didactics. Cinematics and NPCs will guide you to master the basics. The game’s interface has been completely redone and is customizable.

The quests flock to A Realm Reborn and the first is dedicated to your initiation. In order to get used to the game world, you can start by killing wolves, rats or doing some errands. The quests are cumulative! Suppose you have two NPCs that offer you to kill 5 wolves for one, and 3 wolves for the other. The completion of both quests can be done at one time, by killing the maximum in a single area. The count is mixed and will be counted for the completion of the two quests. This will save you unnecessary trips and save you time.

Final Fantasy XIV Realm Reborn also offers quests specific to your character class. These quests take place in solo instances. They will lead you to fight different monsters and bosses and many rewards are key.

It is from level 10 that you will access a series of specific quests called Mandates. There are 4 types: harvest, craft, mercenary and guild mandates. Their levels of difficulty are customizable, and their achievement allows you to earn Final Fantasy XIV gils (the game currency) and XP. That’s not all! In addition to basic quests and mandates, the developers of FFXIV A Realm Reborn were inspired by Guild Wars 2 and introduced random events or ALEAs (Localized Apparitions of Random Events). Although this amplifies the mood of the game, you do not have to participate. Many elements are present to occupy you and have fun for a long time, without worrying about your progress.

The size of your opponents is an equal step, parallel and constant to your level. The area near your departure city is filled with low-level monsters. At a much higher level, you will encounter bosses, mini-bosses and Primordials, but it’s from level 30 that you’ll meet tough opponents and big challenges. You will exploit challenging dungeons that require real teamwork, bosses and primordials to fight in hardcore difficulty and brutal mode. A system called “taking ownership” has been implanted in the game Its function is to give the player who first hit a monster, all the rewards that relate to it, but also to reasonably reward other players who helped him shoot down the concerned Mob.

Let’s note that what has not changed in Final Fantasy XIV A Realm Reborn, compared to the first part, is its high graphic quality. On this point, the game has continued to impress and a new graphics engine has been developed solely to surpass the old version. The animations are very successful and everything is very fluid. A Realm Reborn also stands out from other popular titles with an irreproachable musical touch! Your adventures are cradled with quality artistic compositions that vary depending on the situations in which you find yourself.

OUR OPINION ABOUT FINAL FANTASY

If you need gils while playing in FFXIV, you can buy gils on ffxiv4gil. You can get 2% discount with code if you buy Final Fantasy XIV Gil on FFXIV4GIL.